Jenni joined us when she was in Y10 in School 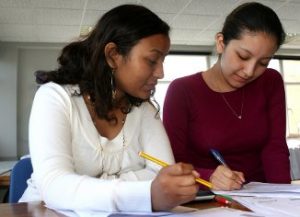 Jenni came to us at the beginning of Y10 when she started her GCSE. She was a very timid young lady, lacking in confidence and had little belief in her own ability. At school she was in the bottom set for Maths and also for Science. She was on the verge of being moved to do a less academic option of either Applied Science or BTech. Her mother had heard about EIKS for some time but she felt that the family could not afford to send her to the Saturday school. As her performance in school failed to improve, her parents had a go at a few evening classes and different Saturday schools. It was all to no avail and her performance actually got worse in certain subjects. The family summoned up the courage in the end and decided to enrol her with EIKS in the Spring Term when she was in Y10. After she started to attend our Saturday classes, Jenni’s confidence began to grow, her performance in school also started to improve. In the Autumn Term of Y11 she was moved up to a higher set in Maths. She can now do Higher Tier in her GCSE, where she has the opportunity to achieve up to an A*. Below is an extract from Jenni’s mother in the summer of 2010:

“Over the years, my family has been on a journey to find the right extra tuition for my oldest daughter, Jenni. We knew from an early age that Jenni needed help but our path to finding the right help was one of trial and error. At the age of seven we started Jenni at Young Education Services in Greenwich. From there we moved from one tuition class to another. I soon realised there was no progress in Jenni’s achievement level but still insisted that both girls carry on attending Thomas Bloggs (name has been changed) Friday classes. One day as I was browsing through Greenwich Time magazine I came across an advert for Excel in Key Subjects. The reviews were extremely good so I decided to give them a call. After receiving the information pack, we looked at the fees and decided it would be difficult for us to fund Jenni (having three other children to think about). A few months later we received an invitation for Jenni to attend a free taster day. After attending the day at their Centre at Greenwich University, she came home to tell me that for the first time ever, she had actually understood everything she had learnt that day. This had never happened with other tuition classes before. We then decided to let her attend Excel in Key Subjects for a year and her improvement was instant. A very shy Jenni, who was lacking confidence and not reaching her full potential, bloomed into a bright, beautiful and confident young lady. Jenni has achieved so much over the year and I would like to take this opportunity to thank everyone at Excel in Key Subjects, for your time and effort in making this happen. To any parent looking for value, effective tuition and high levels of achievement – then Excel in Key Subjects is the place for your child. They attain high standards for a child of any ability. As I write, Jenni is midst GCSE and we are confident – not complacent – that she can get most, if not all of the A grades she’s predicted. I hope Jenni achieves all her goals in life and that one day, her children do her proud, as she did us.”

(Name has been changed to preserve confidentiality) Jenni went on to achieve B grades in Maths and Additional Science and she is now studying AS-level at college. Her younger sister is now studying with EIKS. Read more testimonials from parents and students here.

For your child’s success, request it now.

Scroll To Top
We use cookies to ensure that we give you the best experience on our website. If you continue to use this site we will assume that you are happy with it.I acceptRead more